The Healing of a Dog: The Arrival of Queen Sheba 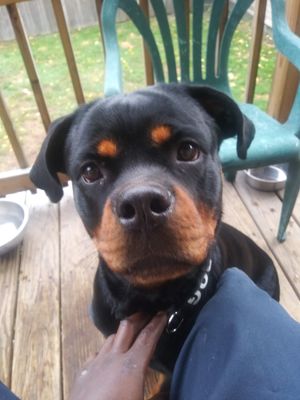 Sheba.  Most know her as the Ithiopian queen who stole the heart of King Solomon in biblical days.  I know her as a spirit of kindness and love that has embodied herself in a 1.5 year old Rottweiler who has recently come into my life and done the same. 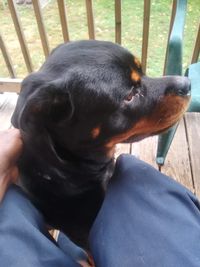 The circumstances around her arrival are just spooky! My wife has been asking me for a dog for more than a couple years, all starting when we had to take in my daughter’s dog Wilie for a few months while her and her mom travelled.  That little taste was all she needed to push a little harder.  As for my part, i was reluctant to allow her to feel like she had any momentum at all, so i just completely shut down the conversation each time it occurred.  I had so many reasons that I presented.   Our apartment was too small.  She was already having a hard time giving me the attention i needed and i had seen her “ooshi boo-boo” persona in full swing when Willie had stayed with us.  I was half joking but the other half was steeped in serious opposition.  And, as it is with most relationships, we were in the midst of a return to sanity after a few days of arguing relentlessly about absolutely nothing at all.  So, in this moment, i dug deep into my bag as i listened to her tell me about this rescue dog she had found.  I mean it was the horror story of all rescue dogs.  The dog was a former breed dog and had real issues with other dogs.  As in, she didn't want to play, she just wanted to kill.  Which is why her current owners kept her in one of those nasty choke leashes.  She was moody, temperamental, and in need of a home.   I was searching for a way to show my wife that our recent peacemaking was something lasting.  And so, i shocked the hell out of her.  After she finished talking about the dog and all its baggage, i said “Baby, get the dog.”  She stopped mid sentence.  Yeah.  She wasn't done talking when i said it.  I remember it now.  She and i have an understanding.  Once she starts talking, any pauses are just for breath, and i am to do nothing; not grab my phone, not look at my phone, not leave the room, not twiddle my fingers, not use the bathroom, not anything except look into the depths of her soul so that she knows she has my full attention.  So when i told her to just get the dog, it took several moments for what i said to register.  She stopped talking.  She looked at me and said “Really????”

“Yeah baby.  I’ve fought long enuff, and who am i to keep you from having something that will add to your happiness?  Hell if you're happy then i'm happier.  Let's do this so you can't say that i was completely rigid and didn't try to work with you.”  Not exactly the sweetest thing to say.  But the intention was real even though I'm an asshole.

I learned something about my wife that day.  After all the time spent telling me all the goods and the bads about this dog, of course with major emphasis on the good, she sits there for literally five minutes and does what I can only assume to be a cost benefit analysis of each choice she had before her.  Take the dog with all the problems, have a dog, but know it will be damn near an unscalable mountain, especially with a husband who is not a dog person at all.  Or just give up on the idea of THIS particular dog and run thru this now open door of cooperation from hubby to find another dog with less problems.  In the span of five minutes that felt like three seconds, she looked at me and said “i’m gonna tell her no.” 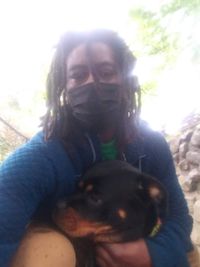 The next day, I had to meet up with my boy Ya who had recently started working with me to promote shows and lock in venues.  We had our first show together coming up in ten days or so and I was determined to set us apart by doing a commercial. So we decided on a simple concept and he came to pick me up so we could record it at his house.  Once I get in the car, he starts going on and on about how he just visited his sister and his dad's ex had this rottweiler on a sixth floor apartment in New York City and never walked the dog.  He told me he took the dog immediately and told her that she needed to call him when her living situation was better.  But, as it turns out, Ya already had a dog.  A big dog at that. And as anyone knows who lives in the city, unless you are Beyonce rich, you nah living in no mansion in city limits. Hell, neither is beyonce for that fact.  His wife was getting sick of the two dogs AND the newborn baby in the house.  So i'm putting it all together in my head and im just like lemme see this dog.

So we get over there, shoot the commercial and sure enuff the dogs come bounding outta the house.  As soon as Sheba sees me, she runs over to me and lays at my feet.  Thats the picture at the top of this article.  It happened so fast. She laid at my feet and then looked up at me and i happened to have my phone in hand to snap a picture before she could move again.

I said "Whats this baby’s name?"

Well, as things like this go, my declaration only proved to muddy the matter for a moment.  My decisiveness gave Ya pause because tho he had just laid out all the reasons why it should happen, he began to think of all the reasons that it would be a bad move.  And, I, of course, made the terrible move of telling my wife as soon as i got home against his and his wife’s advice.  But when Jah show you something, its hard to contain. 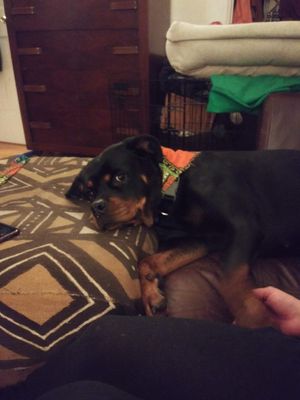 So fast forward two weeks, and Sheba is still nah in my house.  I’m fending off furious combinations from my wife everyday as she continues to inquire what is happening with Sheba.  Have i talked to Ya?  Am i sure that i understood him correctly?  Did i talk to him today?  Is it ever gonna happen?  Why did i show her the picture if it wasn't? The whole nine.   When you are in these situations, you know what you see, but you know that the parties involved haffi see it too, otherwise you're just the bugaboo.  So i had been giving Ya his space and just waiting patiently while hinting at things here and there.  But the radio silence on the matter, and my wife barraging me with jabs like Roy Jones Jr at every moment had me starting to doubt as well.

Then it happened.  Seemingly out of the blue, tho all parties had talked about it at length.  Ya called me and said, “Dude you gonna take this dog or what?  I’m just tired.  And oh yeah she’s on her period, so you're gonna need diapers for her in the house.” Oh lawdt!?! Diapers????

But the joy i felt in that moment and that is still resonating to this day is something difficult to explain.  Yes, i was right.  About the whole thing and that usually is enuff for me to feel good. But this one had an extra element involved.  It was the first time that my wife and i had a real tangible moment that we both witnessed together and saw the same way!  It was the first time that we had something that both of us could point to and say...yeah, that was spirit.

This huge revelation not only brought this beautiful soul into my life, but it also nudged my wife and i along and out of a rut of conflict and discord.  Not to say that we are or were always there.  That wouldn't make sense.  But after four years of being together we were still trying to figure out how to work with each other effectively and efficiently.   If i only had the words to describe the look on her face when Sheba arrived.  I fancy myself a writer but i really think the task is insurmountable.  I will try anyway.  Her face crawled slowly into a smile that could be seen in other galaxies!  Her energy could be felt in Australia!  It was a concentrated light beam of love and awe that emanated from her as she sat on the floor and stroked Sheba’s head.  My tendency towards jealousy almost ruined the idyllic moment.  But i reminded myself that i was the hero, and decided it best to just bask in that for awhile. 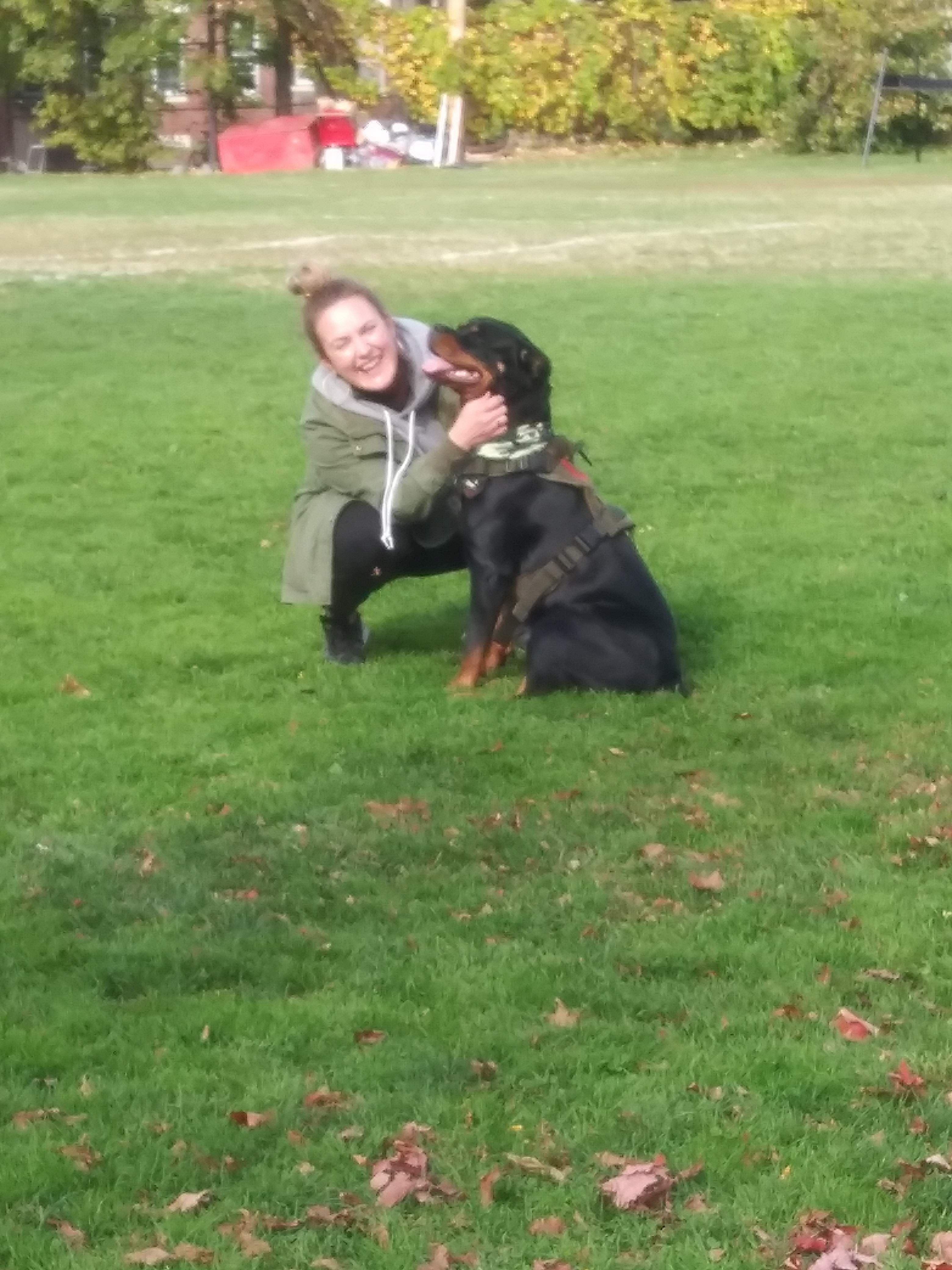 Sheba for her part has been the model housemate.  She just wants love and lots of it and i think thats why we have such a serious connection.  I too want love and lots of it.  My wife is amazing too because she knows this fact and she has been patiently putting up with my neuroses.  But Sheba and i?  We got a connection y'all.  She woke up at 4am the other night yelping and crying from her crate.  Kristi ran out of the room and opened the door to the crate and Sheba immediately ran out of the crate and to the bedroom and just stood there looking thru me trembling.  I pet her gently and kept saying its alright baby.  her eyes never left mine and she slowly calmed down.  Breathing slowed, energy calmed and the whole time she was looking dead in my eyes. That as the sure moment that our connection was sealed.

It's funny because i tried to explain to my wife that we never had pets in my house growing up.  Hilariously, i called my youngest brother to get a cosign on the fact that we never had pets.  He was like “...out of everybody you were the one that loved pets the most! Remember the cat you tried to rescue on Brady street that mom made you leave in the car...IN WINTER?  Yeah.  remember how she froze to death?  Remember the stray dog we hid in the attic for almost two weeks before getting caught?”

i did not remember the dog until he told me.  But as soon as he told me, all the pictures from back then started playing in my mind, and i saw myself there, sneaking scraps from the dinner table and taking them up to Benji.  (corny i know, but i was an 11 year old with a penchant for reading).

Now i have Sheba, and she is every bit the queen her name proclaims.   My wife and i are closer because we witnessed the miracle of Sheba manifest.  Ya and i are closer because he also witnessed the manifestation of this vision and actually mentioned it when he brought the dog to me sayin, "i cant stand in the way of you manifesting bro.  You manifested this shit.  Rastafari lives!"   All i could do was smile and nod, and give Sheba another treat.